At the 2017 executive meeting in Sonthofen WION GmbH had the opportunity to present it’s portfolio. WION is part of the Swiss Professional Media (Basel, Switzerland) and of the Südwestdeutsche Medienholding (SWMH – Munich, Germany). The holding unites several dozens companies in the field of publishing, radio stations, marketing companies and tech enterprises.

WION had gone through a broad transformation the past 18 months and became a key player in the field of VR/AR in Switzerland.

Michael Rava was nominated as president of the chapter. He  had the opportunity to speak in two break out sessions about VR/AR/MR to a broad audience. Anyone was invited to go for a test drive with the HTC Vive and the HoloLens.

WION being part of The VRARA was highly appreciated by the audience and the members of the board at SWMH. 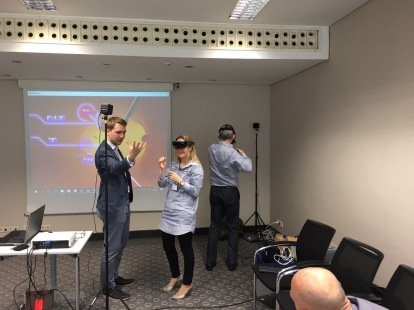 Besides the keynote and demoing there was time for socializing and connecting with other decision makers in the holding. The upcoming weeks and months several follow-up meetings will take place.

WION as a market dominator and Michael as a key-influencer will push VR/AR technology forward in Switzerland and Germany.

Whether you are a fresh new start-up, established small business or a large corporation, we would be happy to get in touch and see what we can achieve together!

We all look forward to celebrate joint successes with you!

There was an error retrieving images from Instagram. An attempt will be remade in a few minutes.